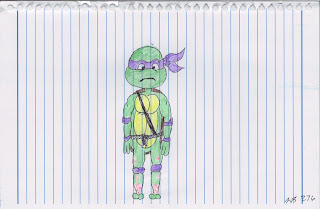 Chiggers are almost microscopic insects from the mite family. As larva they live in grassy areas on the ends of tall grasses. When you brush against the grass they transfer to your clothes or skin and then the real fun starts. They excrete digestive enzymes to feed on skin cells, and once they've fed they detach and go through their remaining life stages harmless to humans. Unfortunately those digestive enzymes create redness, pimple-like heads or hives on the bites and intense itching. Because of the combination of causes--enzymes, allergic reaction/immune response & possible bacterial infection--no remedy works the same for everyone. There are about a million suggestions with how to deal with these bites, but there isn't one universal cure.

Now that you're up to speed on chiggers (not their real name, obviously) can you guess why I'm writing a blog post about them? Yes. I have them. All over my ankles, feet and legs. And it is miserable.

I was helping out on a film shoot this weekend in a park and I neglected to take proper precautions to ward of bug bites. After we got home a few hours later I started to feel my ankles itching and, sure enough, by the end of the night I had red bumps all over my legs. For me it's not so bad when I'm not moving, but as soon as I have to walk anywhere the combination of my socks, shoes and pant legs rubbing against the bites is unbearable.

I've tried a few different remedies, but none of them seem to work completely. I've only had chigger bites once before, but the thing that seemed to help was putting clear nail polish over them. People do that because they think the bugs have burrowed into your skin and are still there so by putting nail polish over the bites you're suffocating them. Really by the time you start itching they have most likely detached, but the nail polish seems to help by putting a protective layer over the bite to keep it from being constantly rubbed by clothing while they heal.

Maybe it seems like this is a bit of an overreaction, to take these small bites so seriously, but I can honestly say bug bites generally don't bother me. I get mosquito bites all the time during the summer and I have no problem ignoring them and they're usually gone within an hour, same thing with most other irritating insects, but chigger bites are on a whole other level. Do a Google search for them and see what other people say. If you've never had them consider yourself lucky. If you have then you know exactly what I mean.

The only comfort I can take in this experience is that they especially like places where your skin or clothing is tight or folded (ie. feet/ankles, knees, etc.) and I hear they can move into and bite much more sensitive areas than your legs, but that hasn't happened to me, thankfully.
Posted by Wes at 12:11 PM 1 comment: 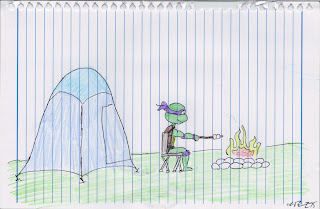 It's been a little while since my last update. I've been mostly off the internet for over a week. Part of that was due to the fact that I was wrapped up in Mass Effect 2 for a week, but the other reason is because my wife and I went camping for a few days last week.

We had made plans to visit some family, but it ended up not working out so instead we decided to take a last minute camping trip for a couple of days at Garner State Park about three hours from where we live in Austin, TX. We also decided to bring our dog, Master Samwise the Brave since he's never been camping with us.

The park turned out to be really nice and because it was the middle of the week we had practically the whole place to ourselves. We got a spot right near the river so we were never more than a short walk away from the water.

The first night we were there we didn't have any food to cook for ourselves so we drove a few miles down the road towards a small town and we found an awesome bar called Buckhorn. There were only five other people in the bar when we got there including the owners. The woman behind the bar offered to make us some food and told us we just missed an amazing musician auditioning to play at the bar later in the week. As we were eating he decided to play some songs for us and it was amazing! We got a free private show and we did a little dancing. He really was good and it turned out to be a great bit of luck that we stopped in.

The next day there were a bunch of hiking paths throughout the park that we had access to. We were both amazed by how well Sam did on the trails. He is easily the clumsiest dog I have ever seen, but on the steep, rocky hiking trails he was like a freaking mountain goat! He did better than we did and by the end of the day he was beat. We tried to get him to swim a bit, but he wouldn't voluntarily go any deeper than his chest. I put him in a little further a couple of times, but he instantly turned and swam back to the shore.

The night before we left it stormed pretty bad, but we stayed nice and dry in our tent that we affectionately named "Tent Mansion" when we bought it for a camping trip to Marfa, TX last year with some friends. It fit two full sized air mattresses with room to spare in Marfa, and this time with just us and the dog it seemed even more huge.

After we packed up it was a bit of a bummer to come back to the real world, but it was a pretty great mini-camping trip and I'd definitely like to go back to Garner State Park for another visit.
Posted by Wes at 2:07 PM 1 comment:

Day 274: Michelangelo is a Drug Dealer 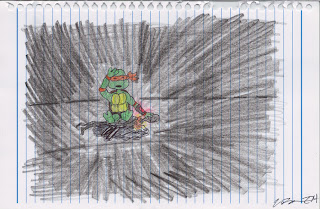 This post is not entirely about Michelangelo selling drugs. It's partly about that, but only in a round-about way. Really this post is about a book. An awesome book that you can read the first part of right now for only $2!

So there's this guy, Robert Brockway, who writes from Cracked.com, one of my favorite time-wasting internet sites. I have long counted Mr. Brockway among a handful of my favorite columnists/contributors to the site and I really enjoyed his book Everything is Going to Kill Everybody. In fact I liked it so much (and happened to be reading it at the time that I started this blog) that it inspired my Day 3 post and picture.

Well, guess what? Robert Brockway has written another book... sort of. I mean he wrote this thing, and it's book length, but you can't physically buy it in a store and only the first episode (of three) is out. Did I mention it's only $2? Here's the run-down:

RX: A Tale of Electronegativity is a sort of dystopian-future sci-fi adventure tale. It stars Red, a drug user/pusher/inventor/tester who wakes up in a strange place after testing a new type of drug and wacky hijinks ensue! Generally these hijinks leave him in mortal danger, or at least pants-less. Co-starring are QC and Byron who have their own set of problems and, in my mind at least, are the perfect balancing characters to round out Red's ultimate adventuring party. Well, maybe not Byron, he seems pretty goddamn useless, but you need a third so who am I to argue?

This shit's full of crazy nano-tech mixed with lots and lots of drug use (and some robots). It's pretty awesome and there are a number of ways to enjoy it. Allow me to elaborate.

Visit the official website here to read about the story and buy your digital download of Episode 1:

After that you have a couple of options for getting the rest once they're released.

1) Just, you know, wait for them to come out and then pay your $2. It shouldn't take too long; Episodes 2 and 3 have already been written.
2) Write a review for Episode 1 and submit it by following the instructions on the site to get your name on a list for a free copy of Episode 2
3) The best option? Kickstart that shit.

There is a Kickstarter campaign going on for two more days in association with this book. This is not to fund the book, but is more like a pre-order program complete with bonus gifts. I suggest doing this because in addition to getting Episodes 2 and 3 you can also help fund a game based on Episode 1! Only catch is the video game only happens if he hits the $7,500 mark. So, you know, give generously and all that.

I hope this has inspired you to check out RX: A Tale of Electronegativity. I was initially intrigued by the unique approach to publishing and the low price point, but I ended up really liking the story so I hope some of you will take a chance on it as well.

As for why I chose Mikey for the picture, my first thought was Donatello because he's the only one smart enough to synthesize these drugs, but he's really more of a tech guy and Red is pretty anti-technology, at least in the form of his own enhancements. After all, it might interfere with the drugs. Out of the other three Turtles I think Michelangelo comes closest to Red's interesting lifestyle. This picture depicts Red at the beginning of the story, waking up in a strange place amidst the ruins of a maintenance bot with his arm display flashing "OVERDOSE." All-in-all not a great way to start a hangover.
Posted by Wes at 10:17 AM No comments: